This property in Ulveston had previously been used as a guest house and was now being refurbished and turned back into a home. The kitchen and conservatory had a Slate tiled floor and as you can imagine had seen a fair amount of wear from the numerous fried breakfasts that had been prepared in there. The owners had decided to replace the kitchen but were keen to keep the slate floor however it was in a bad state and looked as if it had never been cleaned and sealed for some time.

I did a small test using Tile Doctor Remove and Go (which you can see in the photograph below) and it came up really well, naturally we were booked to come back and finish the rest of the floor which I had estimated would take two days.

Two weeks later I turned up at 9am as agreed and set up my equipment, the kitchen had already been removed so with the exception on the cooker little preparation was required. I worked in small areas using a high pressure spinner tool to remove as much dirt off the tiles as possible and a wet vacuum to remove the soiled water.

Stubborn areas were treated with Remove and Go and then I moved onto the next job which was to clean up the grout. For this I used a strong dilution of Tile Doctor Pro-Clean which is a alkaline tile and grout cleaner that is safe to use on natural stone. It was scrubbed in using a stiff brush and then rinsed off with clean water, again using the wet vacuum to remove the soiled solution. The floor was now clean but still damp so I tidied up my tools and left for the day.

The Next day I came back and inspected the floor to ensure it was dry and that I hadn’t missed anything. All was well so I started to seal the floor with five thin coats of Tile Doctor Seal and Go which is an ideal sealer for slate as it adds a nice subtle sheen to the tile and being water based there is no smell as it dries. The sealer was applied using a paint pad applicator and each coat took around about twenty minutes to dry.

When it was complete and the floor had dried I packed up my equipment and spent some time talking to the customer to check they were happy with the results (they were very happy) and to advise them on how to maintain the floor using with a neutral tile cleaner going forward which will help extend the life of the sealer.

I recently paid a visit to Windermere in the Lake District to clean and re-seal a Victorian Tiled hallway floor. The customer wanted the shine putting back on the Victorian tile and some tile grout had become loose and needed replacing.

On arrival I set up my tools and covered any areas that needed protecting against water. Once that was done I started to strip the floor of any remaining sealer using Tile Doctor Remove and Go which is a coatings and sealer remover product that is safe to use on tile, stone and grout. Working in small areas the product was scrubbed into the tile and then washed it off with water using a wet vacuum to remove the soiled solution. This process was repeated until the whole floor was clean, there were a few stubborn areas and for these I mixed the Remove and Go 50/50 with Nano Tech Ultra Clean which adds tiny abrasive particles into the solution to make a more effective product. The process of scrubbing the floor made me realise that the loose grout problem was greater than first thought and some tiles need re-laying so I decided to come back and do this the next day, before leaving however I gave the floor a thorough rinse to ensure any trace of cleaning product was removed.

The next day I arrived and fixed all the loose tiles, my preference is to use the Mapei range of tile adhesives and grout, in fact the grout comes in a range of colours which is very useful if your filling in holes in travertine etc. One the adhesive had gone off I began to grout them in including those areas where the grout was missing or become loose. The last step was to wash off the grout from the tile surface and making sure it was all tidy for the next day. 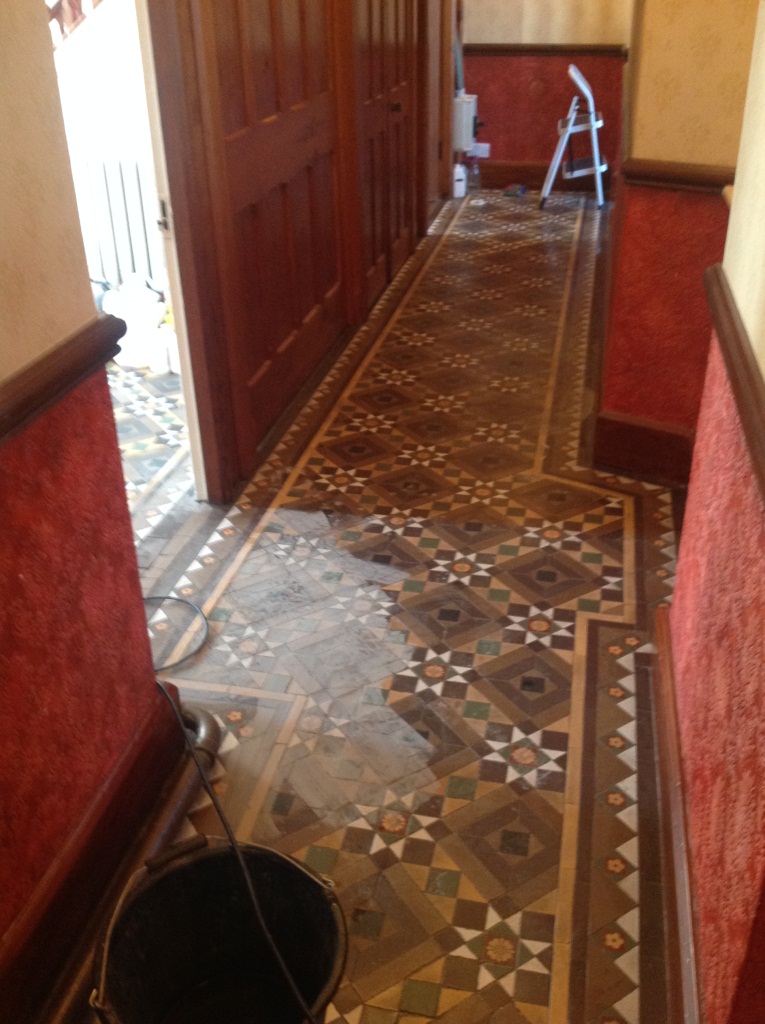 On the third day I returned to the house and after verifying the floor was dry with a damp tester and the grout had hardened I started sealing the floor with Tile Doctor Seal and Go putting on thin coats which took about twenty minutes to dry, in total seven coats were applied which gave the floor the nice shine the customer was after.

This job took me three days in total and after I had finished we discussed how to maintain the appearance and increase the longevity of the sealer by using a Neutral Cleaning product which unlike many acidic cleaners does not eat away at the sealer.

A customer from Kendal (famous for its Kendal Mintcake) called me in to look at their Quarry Tiled Utility floor, which was looking very dirty and stained. On inspection the sealer had broken down and was no longer protecting the tile resulting in dirt getting ingrained into the pores of the tile resulting in discolouration. We agreed what short of finish was required and the customer booked me in to do the work. 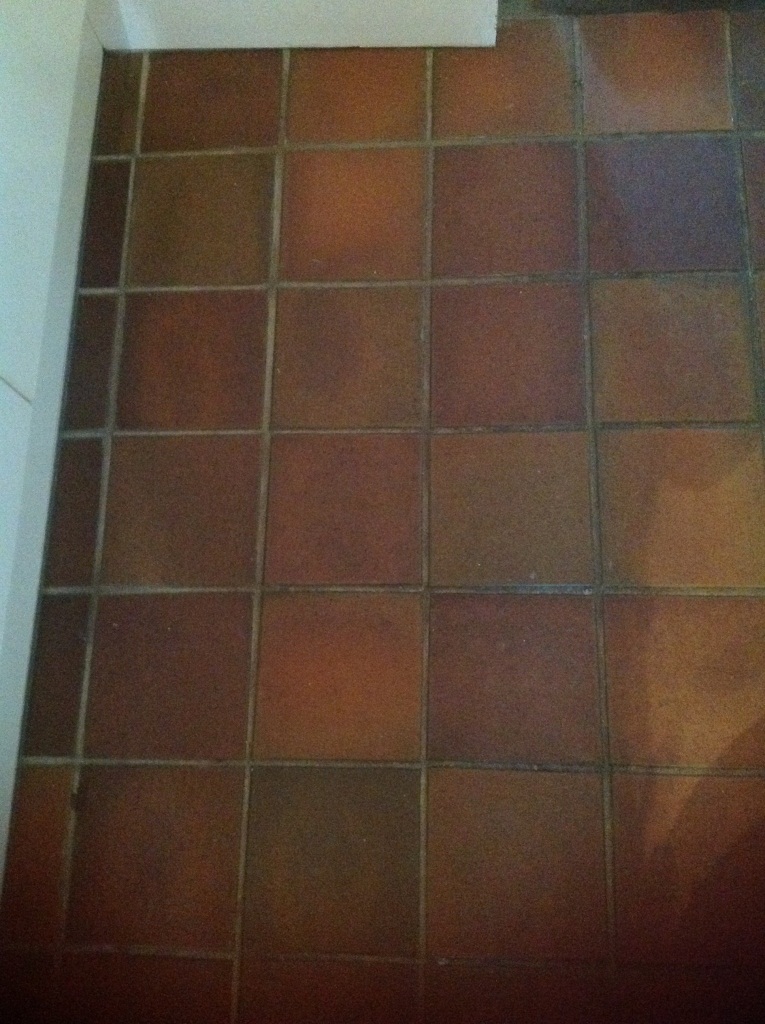 My first job was to protect the surrounding areas from splashes so on my arrival I covered the wooden floor in the hallway before starting to remove the old sealer with Tile Doctor Remove and Go, I sprayed it on working in small areas leaving it to dwell for a while before scrubbing it in with a stiff brush making sure I scrubbed it in well before removing the soiled solution with a wet vacuum. I scrubbed all the grout joints at this point to make sure they were all clean and then washed the floor down to remove any chemical and neutralise the floor. It was a relatively small floor so I left it to dry and returned a few house later to seal it. 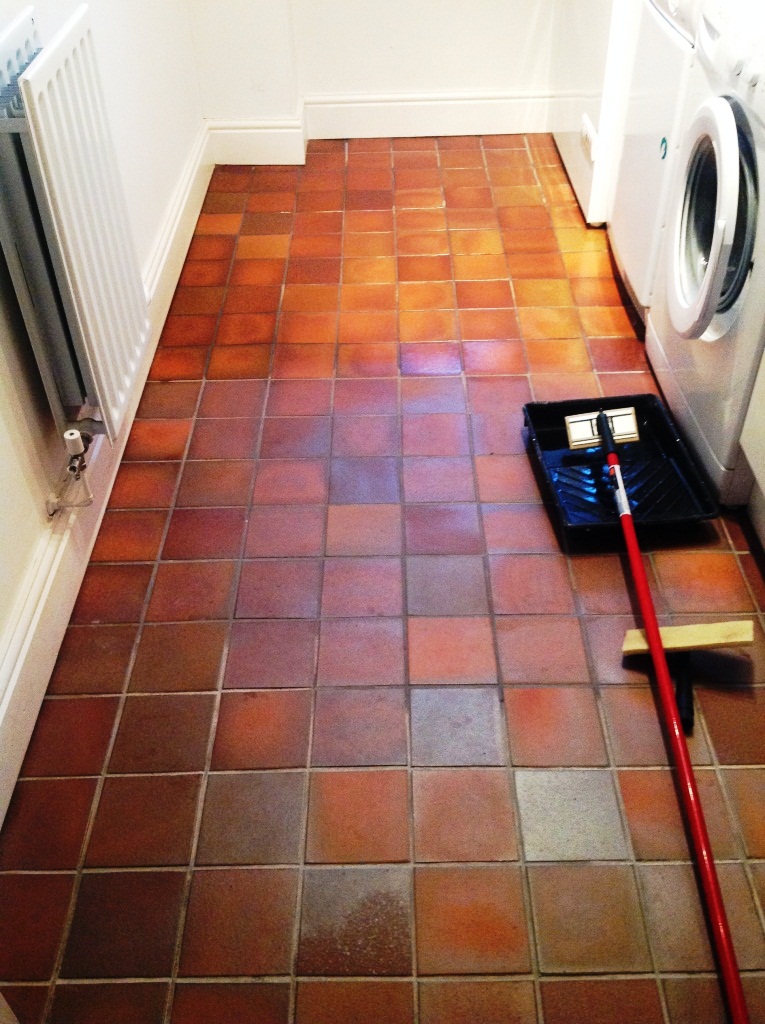 On my return I used a damp tester to make sure the floor was dry, which it was, so I sealed it with two coats of Tile Doctor Colour Grow which is a as well as protecting the floor brings the natural colours out in the tile. Naturally if the damp tester had showed that it was damp I would not have sealed the floor that day as the sealer would not have taken properly. 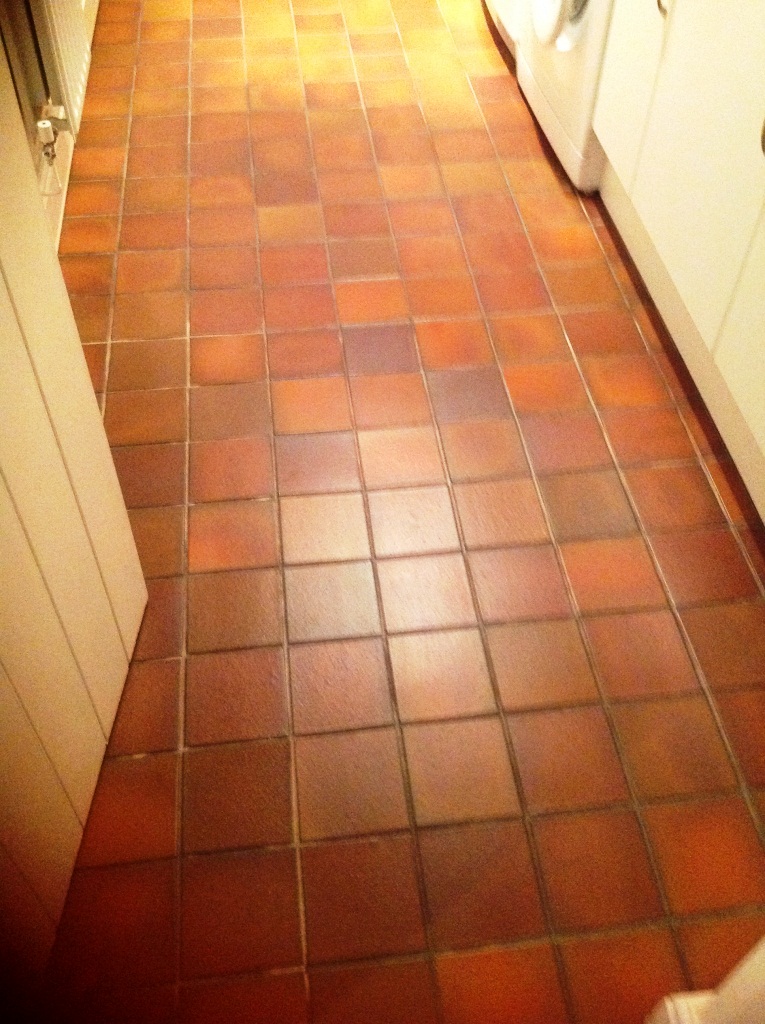 This job took me one day as it was only a very small floor and I was able to seal it in the same day the customer were happy with the result I went through the maintenance program and explained how to clean the floor.

Restoration of Quarry Tiles in Kendal

The customer from Windermere called me in to take a look at their Slate tiled kitchen floor which was looking very dirty with ingrained stains and marks on the stone from spills etc. that were proving difficult for the customer to clean. The brief was to give the floor a deep clean, remove the stains and make it easier for them to maintain thereafter. On inspection I could see the sealer had broken down, which is why the slate was getting stained and hard to clean. I did a test area on the slate and grout to show them how it could look and it came up really well so the signed my Work survey form and booked me in to do the work.

On my arrival I covered the wood and carpet in the kitchen and hallway to protect it then started on removing what was left of the old sealer with Tile Doctor Remove and Go; I sprayed it on working in small areas and activated it with a brush making sure I scrubbed well around the areas of slate that are risen as in this slate its uneven and then washed it off using a wet vacuum to remove the soiled solution. It was very satisfying to watch the tiles come back to life with bright colours, I kept at it all day until all the Slate tiles were clean and the sealer was fully removed, I then scrubbed all the grout joints to make sure they were all clean then I washed all the floor down before I left ready for sealing the next day.

The next day I sealed the floor with Tile Doctor Seal and Go to protect and enhance the tile putting on five coats before it was fully sealed. I used an industrial air blower to help it dry quicker as the house owner had a dog and I did not want any paw prints in my work. Below is a photograph of the end results in which you can see the natural colours have come back to life. 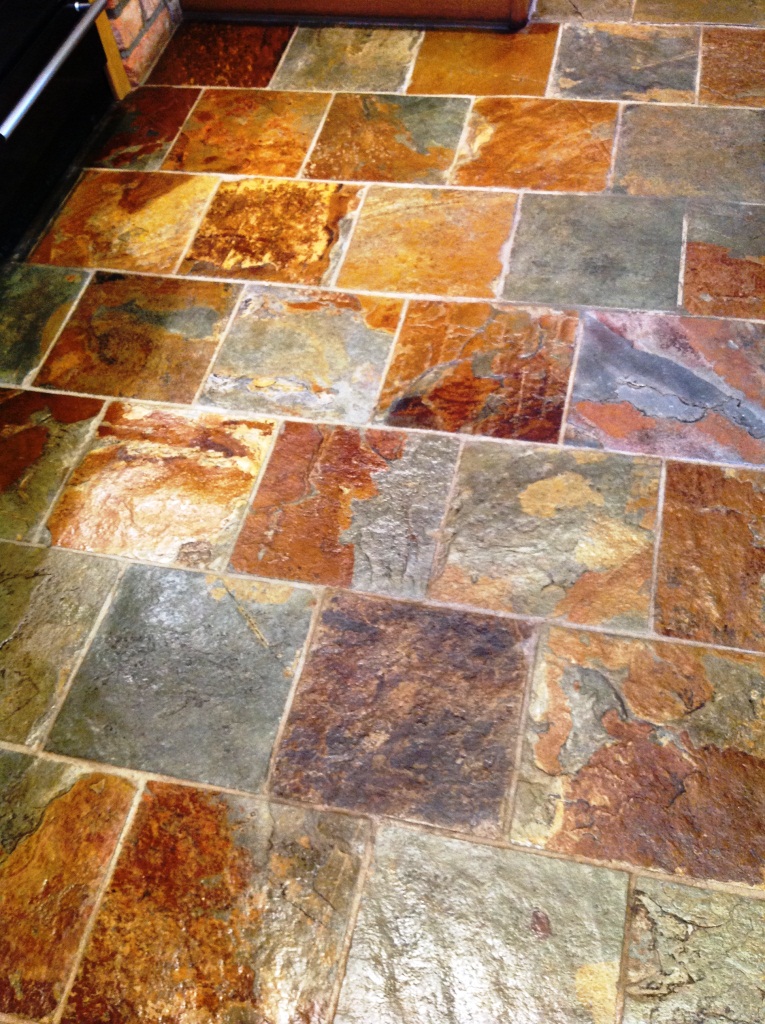 This job took me two days and the owner was extremely happy with the result, I also spent time to explain a maintenance program discussing how to clean the floor with Tile Doctor Neutral Tile Cleaner which has a low PH and not an off the shelf supermarket cleaner which being mildly acidic can break down the sealer and reduce its life.

Restoration of Slate Floor in Windermere

A customer in Kendal requested that the colour of grout installed on 20m2 newly laid textured Porcelain tile floor was changed; the tiler had used a Sandstone coloured grout and they were not happy with the colour or the grouting in general which looked patchy. I recommended the use of an epoxy Grout Colouring product that re-colours, seals and rejuvenates existing grout joints and comes in twelve different colours and after showing the customer the different colour options they picked Charcoal Grey. 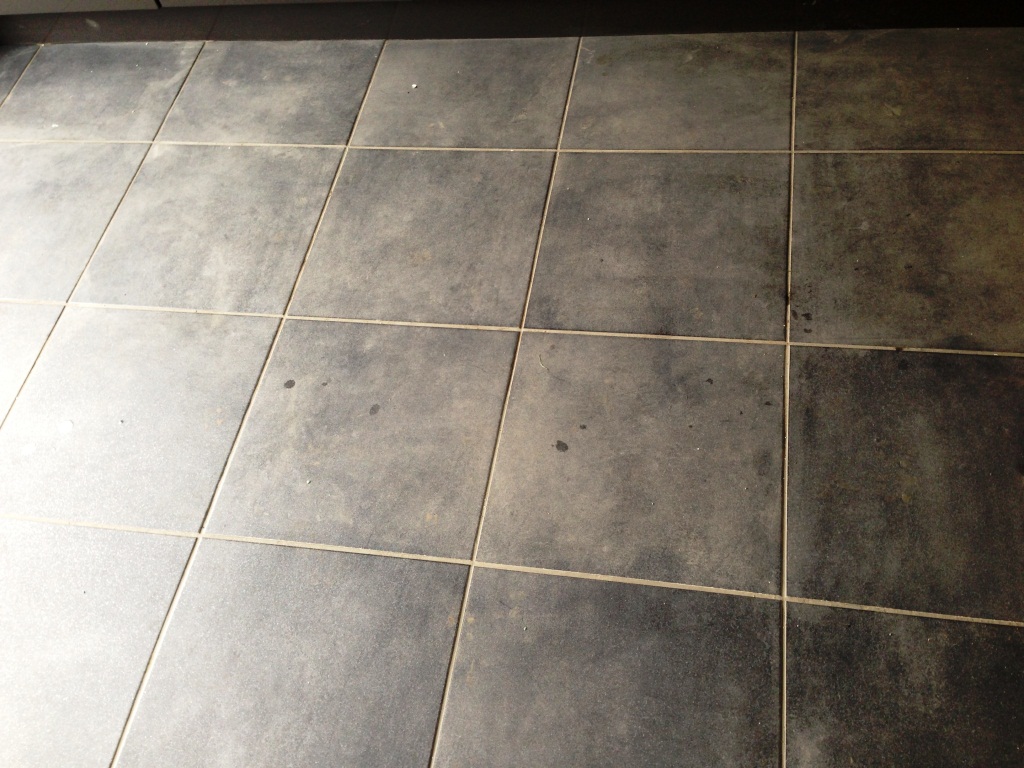 I did a test area so they could see how it might look under the lights which went well and so I started to apply the grout colouring to the whole kitchen floor completing small areas until the entire floor was covered and taking care not to get any on the Porcelain tile as the textured surface makes it difficult to remove and requires the use of an white abrasive scouring pad. Normally you have to use a Pre-Treater product on the grout before Grout Colouring however this grout was new and so this step was unnecessary.

This job took me one day and only required one tube of Grout Colourant. The owner was extremely happy with the result will now have a fairly maintenance free tiled floor as Porcelain tiles are very hard wearing and the epoxy grout colourant acts as a barrier and therefore unlikely to discolour.